Stories, questions, lies about the one that got away....

Having seen a few fox cubs getting around, plus a few flat ones on the road, I knew there was a fair chance that I'd be seeing some around home. Sure enough, doing some slashing with a self propelled mower, I spied a dark form sneaking off as I made my way out in the dusk (mowing at night is much nicer than the heat!). After a couple of hours of mowing, I headed back to the house and bumped another cub in the previously cut area.

Thinking they'd be interested in some kind of fascinator/lure I made up one with a long piece of piano wire, a few turkey feathers and a long string. To my mind it looked great, nice movement and colour but it wasn't to be....

With the late sunset, I was able to take care of the home duties then sneak out to our back paddock. Setting up under a tree with the lure some 6m away, I sat back against the redgum and waited for the evening to unfold. Shortly after, a cub made it's way along the edge of the mowed area. A quick wiggle with the lure as it got closer (some 40m away) got it's attention, but clearly any movement is threat because it quickly dived through the fence into the long grass on the neighbours laneway. This pattern followed with the next 3 or 4 cubs, before I decided to leave it behind and creep in close to the fence line, I figured from the other nights behaviour that the cubs were likely to return the same way. After 15min or so, a couple of cubs snuck through further down the fenceline and back to the blackberry patch they must be calling home. Finally, just on the last gasp of shooting light I heard a rustle in the grass and a cub trotted through 15m away from me. It must have seen something because it froze as I came to full draw. The arrow sailed harmlessly below it and the cub took off at a rate of knots for home.

Fast forward a day and I was trying to figure out some way to sit up in the trees. It came to me that I could possibly use my orchard ladder to butt up against a tree and sit with my back to it. A quick check in the backyard showed it worked great, nice and stable and able to sit freely in uneven terrain. A couple of test shots and I was off, setting the ladder up against a nice big eucalypt in the corner of our property, directly in the path of just about every fox I've seen moving through, adult or juvenile. 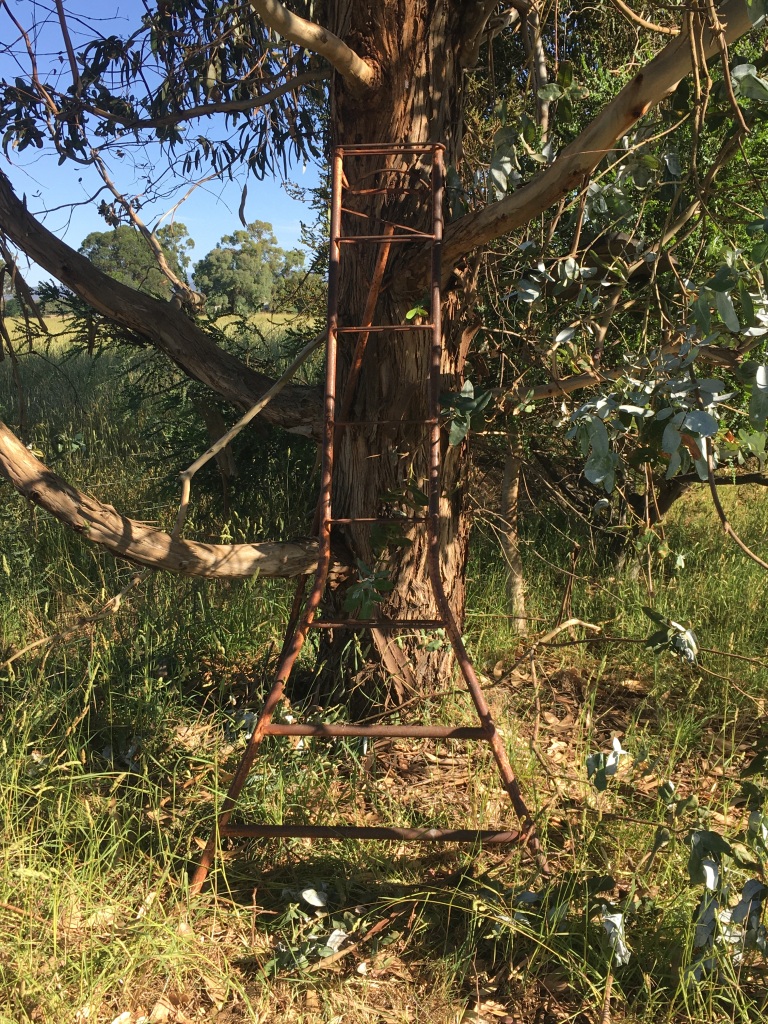 An hour before dark, I was up in the tree sitting on a foam matt for a bit of 'padding' on my bony behind. A few branches were in the way, so I quickly shimmied down and did a bit of judicious pruning. Back aboard my seat, I looked towards the blackberry patch and immediately saw a cub standing looking in my direction. It must have seen some movement, as it was hesitant to move along, and when a cow in the laneway moved, it took off back towards the thickest patch of blackberries. Laughing out loud, I used the opportunity to scan the surrounding area for more foxes, and deep down towards the river the possibility of fallow deer. 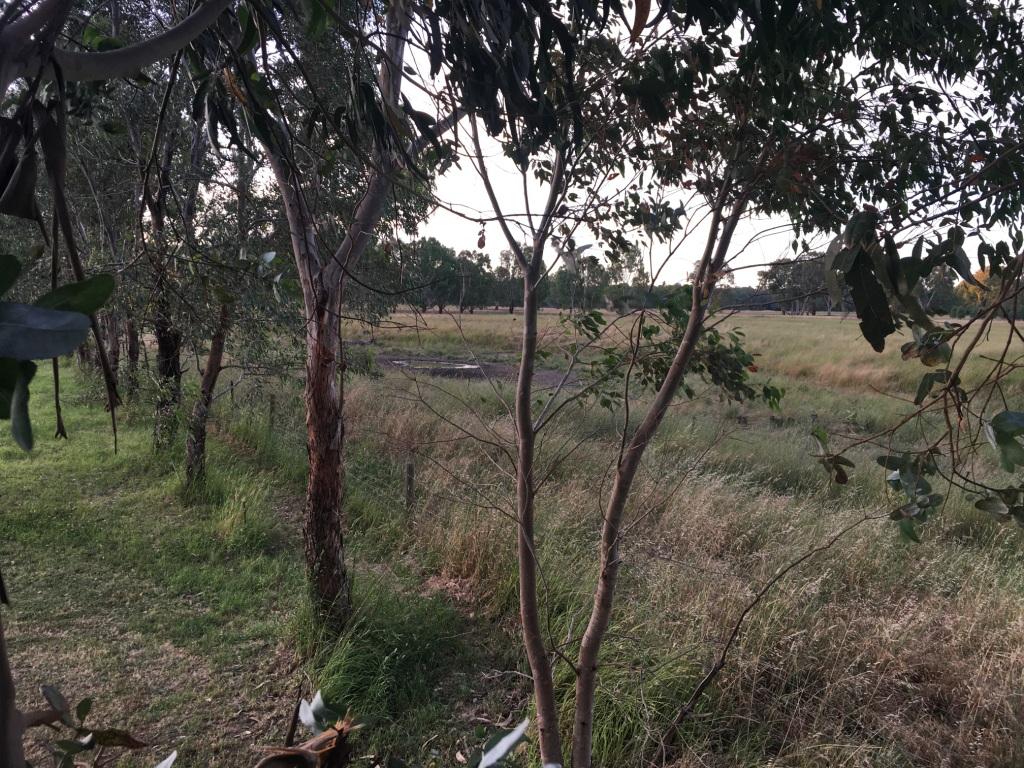 Calm returned, the cows moved on and the night slowly crept towards us all. Above me a rufous whistler called and chased insects, sacred ibis flew into their nights roost and our sheep lazily chewed their cuds.

Out of the corner of my eye I saw a shape that hadn't been their previously, another cub in the open. It cautiously made it's way along the edge of the long grass, frequently stopping to chase insects like grashoppers and crickets in the grass and disappearing behind the line of gums along the fence. 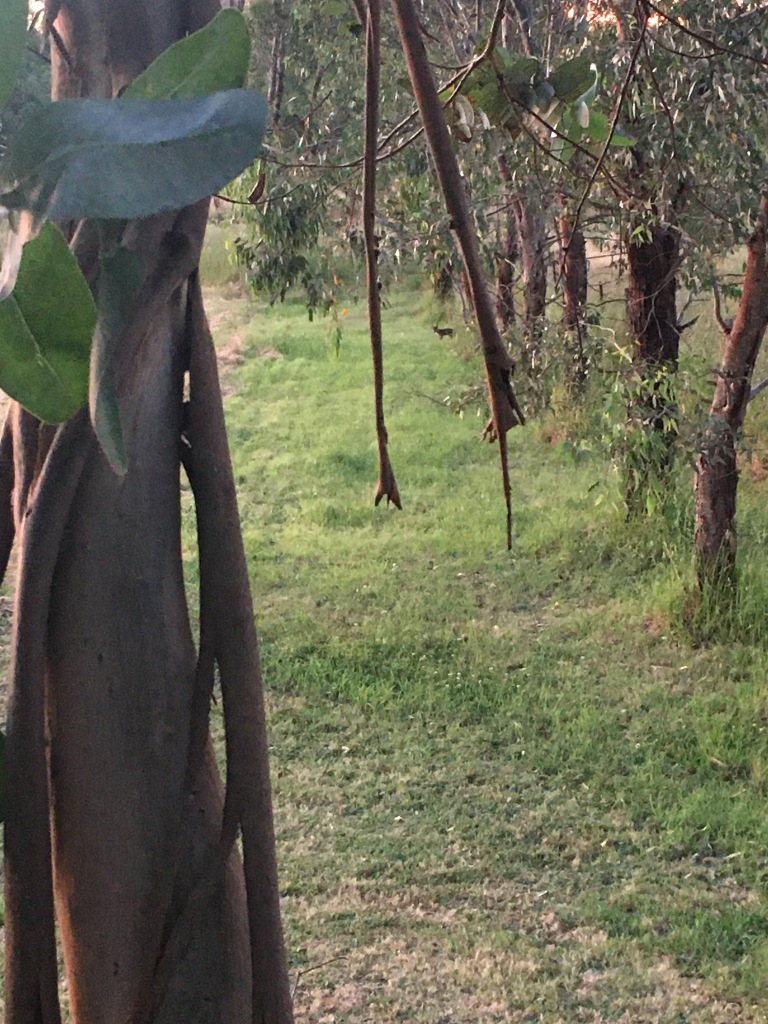 Stepping out from behind a tree about 18m away, the young cub circled around a few times before turning away. Taking the opportunity to draw, it immediately walked behind a branch off to my left. Letting down, the cub again circled back and sat down almost facing me directly. As it turned away, I drew again hitting full draw. The cub turned to face me again as I drew, so I picked the point of it's nose as my aiming point and the arrow was away, smashing into the face of the fox. It back-flipped, the arrow flopping around as it tried to rid itself of the 'thing'. Righting itself, it took off at a very sick pace, before reaching the end of the tree line and stopping. By then, I had the binos in my hand and could see it's head clearly, blood pouring from it. It swayed drunkenly and turned to disappear. I couldn't make it out, how could 600 odd grain from 55# and pushing a freshly sharpened shaving sharp Outback not pass though? I'd seen a similar setup chop through 2x rib bones, chest cavity and a femur of a goat. Hopefully I could get my hands on the fox to find out.

Some time after, another pair of cubs made their way across the open grass towards me. When they reached the place the cub had vanished, their care-free attitude changed and they spent some time in the area. One of them then vanished, while the other made it's way along the other side of the fenceline. I was able to track it's progress by the rustling grass as it came past me only 10m away. Unfortunately, the angle of my seat meant that I was shooting straight out, the tree was in the way of my drawing arm and given that their was a very rocky road underneath it, I elected not to take the shot (I do have permission to hunt the farm next door so could have taken a shot). Getting downwind of me, the cub stopped and raised it's nose, sniffing carefully for a few moments. Then it turned, retreated a few meters and dived off the side of the lane into the billabong on the other side.

It's sibling began to track down the blood trail of it's stricken brethren. The live cub cautiously made it's way towards me, following the blood trail exactly. Crossing the treeline into the open, it stopped 18m away, a branch from the closest tree blocking the arrows path and preventing a shot. It slowly sniffed it's way around, not coming any closer before suddenly turning and taking off at a run for home. While glassing the cub, I spied my arrow, the fletchings conspicuously covered in blood - what the hey?

With dark fast approaching, I climbed down from the ladder and made my way over to the arrow. There was blood full length from point to nock, Suddenly it made sense, the angle of the flight meant that it had hit the ground and stopped. The cub must have leapt up at the shot or as it was hit and forced the rest of the shaft through as it was flopping around. Turning to the tracking, I was surprised to find very little blood until I neared the spot where the cub had stood. Spying a dark form, I could see the cub lying motionless just to one side of where I had watched it. My shot had been almost perfect, hitting maybe half a centimeter high of the nose where it had passed through the lower jaw, into the chest cavity and then out the bottom of the chest. 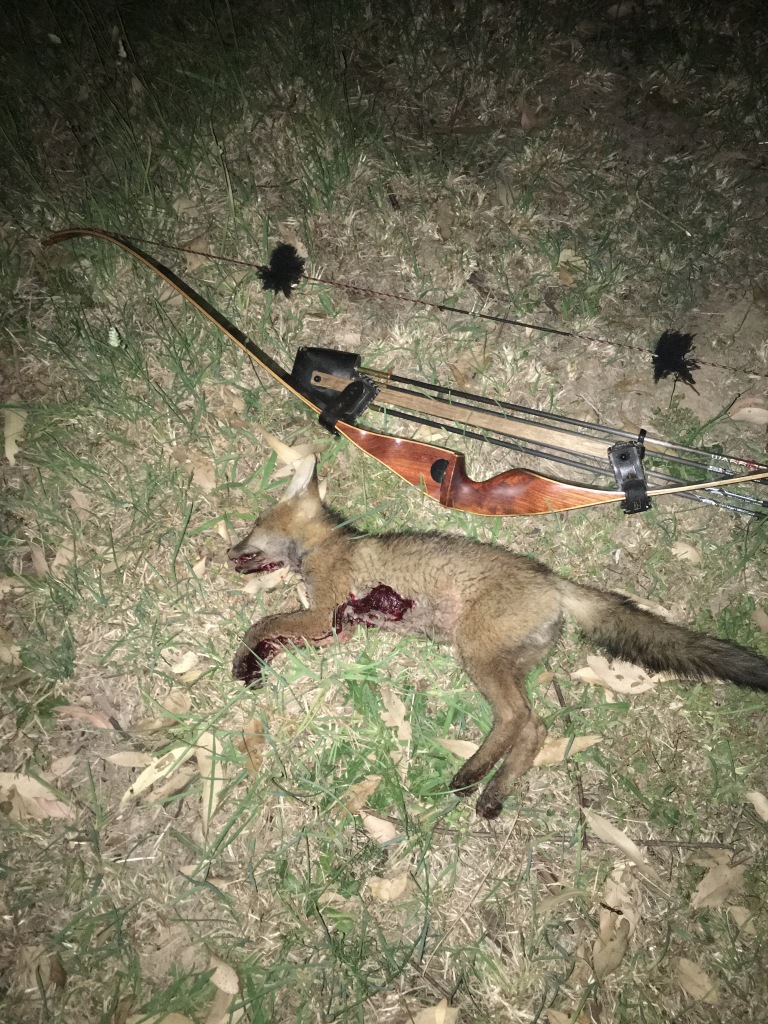 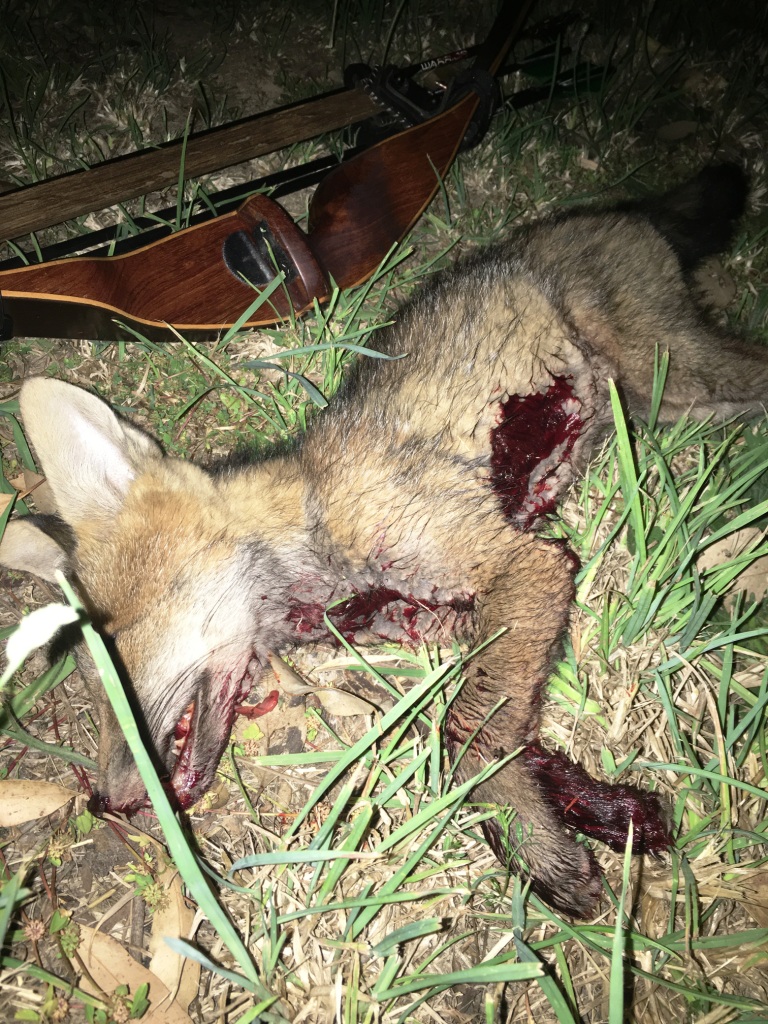 Turning for home in the dark, I was glad to rid the area of another killer even if 'only' a cub. I can see now why the yanks love tree stands so much, you can see so far and if I get the chance I'll be putting something like this up again if I can get access to some more private property. Just a pity I worked this out 2 weeks before we move after selling the house.

Good to see Steve. One less feral killing our native wildlife. Thanks for sharing.

Thanks Jeff, always good to remove another one!
Top

Hi Steve
Love chasing foxes myself, well done.
I go all out and have a home made electric rabbit and use one of those
battery powered garden ornaments that has a butterfly on a wire, but have
changed the butterfly to a small piece of fur, it just mesmerises them.

What make is the bow quiver and is the bit of wood on it a self mod.
Cheers
Matt
Top

I've thought about making something like that and probably will - I just like the simplicity of a bit of string and some feathers though, nothing to go flat!

That's a 1970 58" Shakespeare/Root Warrior I got off a member here. The wood is a strip of oak I made up when the bottom strap broke on the quiver and my velcro version struggled to hold it on the steep fades without sliding down. Had an interesting situation with a broadhead coming loose, so needed some security!
Top